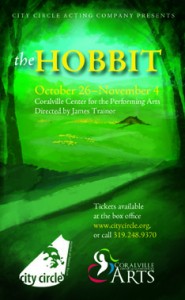 “In a hole in the ground there lived a hobbit.”

Millions of imaginations have been born from this unassuming first line of J.R.R. Tolkien’s 1937 masterpiece and, director James Trainor reminds us, “The Hobbit continues to capture new imaginations over the years.” For generations, children have learned about adventure through the wide eyes of Bilbo Baggins, and this fall City Circle will be weaving the magic of Middle Earth on the CCPA stage. The script, adapted by Patricia Gray in 1968, is a popular property in its own right, and City Circle is excited to be bringing it to the Corridor.

There are a wide variety of opportunities for actors in this show. Trainor says, “this will be a youth-focused production, but there will be parts for adults as well, and the finished product is sure to be fun for the whole family.” City Circle is thrilled to announce the detailed audition information:

Trainor says that he is “excited to guide young actors through the magical world of Middle-Earth,” but doesn’t want you to forget the wide range of opportunities available. “If you’re 8 or 80 and love the stage, come out and audition!”

Auditions run 5:30-7:30 p.m. on Tuesday, Aug. 28, and Wednesday, Aug. 29, and will be held in the E. Jean Schwab Auditorium at the Coralville Public Library. Rehearsals will begin after Labor Day, and the show opens October 26. Contact cc.thehobbit@gmail.com with any questions.